Best Places To See Black Bears in the Smoky Mountains

Want to see a black bear during your trip to the Smoky Mountains?

It's estimated that around 1,600 black bears live inside the Great Smoky Mountains National Park that straddles the mountains of North Carolina and Tennessee.

Since the national park is only about 800 square miles in size, that means that there's nearly an average of two bears per square mile. Black bears, or Ursus Americanus, are native to the Smoky Mountains and stand as a symbol of this wild part of the country. 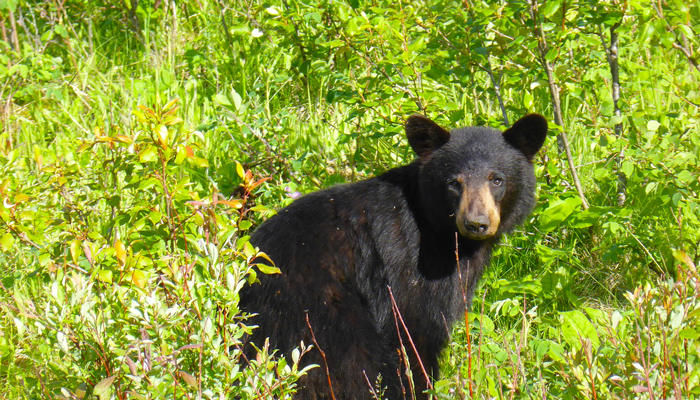 Where To Find Bears in the Smoky Mountains?

Generally, black bears seem to prefer staying on the Tennessee side of the Smoky Mountains. For the most part, many bears do their best to avoid humans and many wildlife viewers are disappointed by not being able to find a bear.

Here are some of the best places for viewing bears in the Smokies without even leaving the safety of your vehicle.

If you're out hiking, there are other sorts of places you should be mindful of encountering animals. Black bears can be found at all elevations in the national park, but it's particularly common to have a run-in with bears near a food or water source such as:

Streams and Rivers – Bears use creeks as a source for water, food, and occasionally as highways to quickly traverse the park.

Blackberry or Blueberry Bushes – Bears are omnivorous, but their diet primarily consists of nuts, roots, and berries.

Mountain Balds – Due to food sources like berries, mountain balds are a hot spot for seeing black bears such as Andrews Bald, Spense Field, and Gregory's Bald.

Backcountry Campgrounds And Shelters – Bears are often attracted to the scent of leftover human food in campgrounds and picnic areas in the national park.

Wherever People Don’t Go – Wild bears usually do there best to avoid people since they are naturally afraid of us.

Best Times To See Black Bears in the Smoky Mountains

While there are exceptions, bears are usually not that active during the heat of the day. Most hikers and motorists see bears during the hours close to sunrise and sunset.

Bears are most active during the summer, spring and fall months. As a result, the best times to see bears are while they are actively foraging for food.

Due to mild winters, black bears in the Smokies seldom enter full hibernation. Instead, they enter a low energy state that helps them conserve energy when food is less available.

During warm winter days, they will often venture out of their dens. That being said, black bears are typically less active during the winter. In contrast, bears are especially active in the late summer and fall as they prepare for their winter snooze.

It is unlawful to willfully approach a bear within 150 feet. It is also unlawful to knowingly disturb a bear in the national park. Violating this law is a federal offense with penalties as high as six months in jail and a $5,000 fine.

Like most rules, this law is in place for good reason. The park provides guidelines on safely and ethically viewing wildife in the Smoky Mountains. Giving bears plenty of space is the safest thing for both humans and bears alike. If you admire black bears, the way to best respect them is to:

Similarly, steep fines are in place for anyone who feeds bears or who does not follow park protocols of storing and disposing of food.

Bears are wild animals. They are unpredictable and bear encounters in the national park have resulted in injury and death. To date, only one human has been killed by a black bear in the Great Smoky Mountains National Park.

While the thought of being mauled by a black bear is certainly terrifying, such attacks are astoundingly rare.

Statistically, you are far more likely to be hurt or killed in an automobile accident on your way to the park than the risk of being attacked by a bear. Considering that 10 million people visit the park every year, the rate of bear incidents is remarkably small. 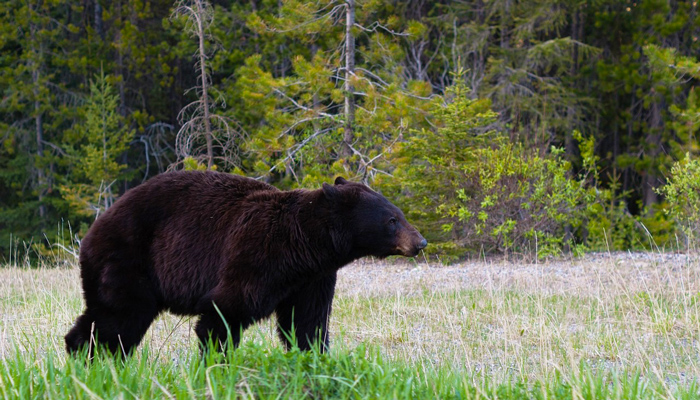 Do Not Feed Bears

More often than not, bears are usually the ones who pay dearly when humans do not follow national park guidelines.

To this day, the national park service reports instances of park visitors intentionally feeding bears or leaving out garbage that attracts bears. When this occurs, bears begin to think of people as a food source.

Once a bear associates people with food, they may follow park visitors and even become aggressive when they are not fed. For the safety of people, these bears are euthanized by the park service.

Though many complain about this practice, the fact is that our careless actions make it difficult for bears and humans to coexist, even in one of the largest protected areas in the Southeast United States.

However, by following some precautions, you can safely admire these fascinating creatures.

Bear Safety Tips in the Smokies

The national park service has a great guide for bear safety in the Great Smoky Mountains National Park.

If you encounter a bear there are some rules to keep in mind:

If the bear is making huffing noises or swatting the ground, the bear is demanding more space. While encountering a bear like this may be scary, it is actually a good thing – the bear isn't interested in you or your food, the bear just wants you to back away.

If a Bear Follows You:

Here is a helpful video for expert rules for encountering bears and other animals in the national park:

Bear Bells – A set of jingle bells help to alert bears of your presence. More often than not, bears appreciate the chance to run away from you.

Bear Spray – For deterring bears in extreme cases. As black bears rarely treat humans as prey, pepper spray is often unnecessary, but many hikers prefer the safety it provides.

A Group of Friends – Bears are less likely to approach a group of people.

Binoculars, Spotting Scope, Telephoto, Lens – These items are perfect for safely admiring bears at a distance.

Final Thoughts on Viewing Bears in the Great Smoky Mountains

While there are some necessary precautions for viewing bears in the national park, they are really remarkable creatures. It's truly exciting to see such a large animal living in its natural habitat.

One of the best ways to ensure you'll see a bear is to plan a long stay in the Smokies. For example, by booking a cabin in Pigeon Forge for several nights, you'll be able to make several trips into the national park to view wildlife.

We've got all the info on what's new in Pigeon Forge in 2020. Check out all the new stores, restaurants, and upcoming attractions in the area.
newpigeon forgevacation tips

Looking for Pigeon Forge restaurants open on Christmas Day 2019? From a specialized holiday dinner to BBQ, here's all the up to date info on where you can enjoy Christmas dinner in Pigeon Forge.
pigeon forge christmasrestaurantsvacation tips

Dollywood or Disney: Why Dollywood is Great for Families

While it may seem like comparing apples to oranges, deciding between Dollywood or Disney offers some surprising similarities and differences between the two parks. If you’re wondering why Dollywood is great, then we’ll gladly tell you why.
dollywoodvacation tips