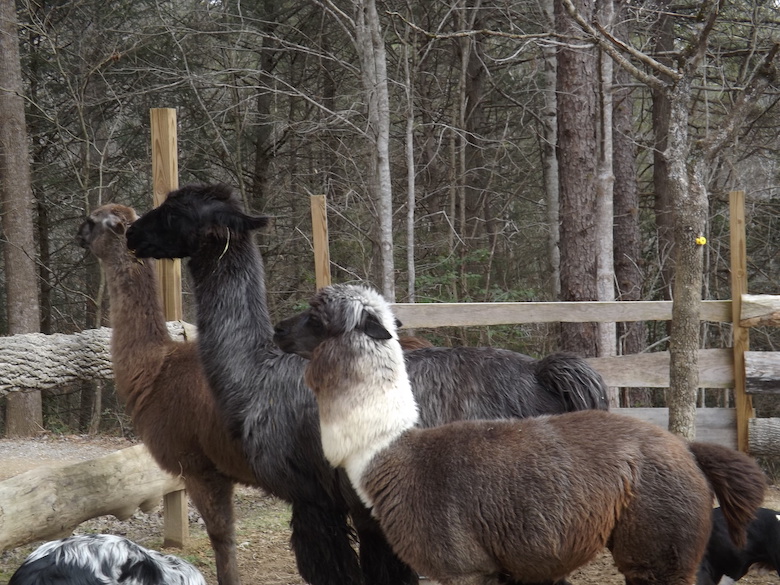 A vacation should be a time to enjoy experiences one usually wouldn't have the chance to do back home. While the Smokies have plenty of entertainment options along the Pigeon Forge Parkway, sometimes you need something with a little less flash and a bit more of a personal touch. Something that feels more inspirational than sensational, more reflective than thrilling. Smoky Mountain Llama Treks delivers just that - a one-of-a-kind experience that will leave you feeling more inspired and cheerful than when you arrived. From farm visits to overnight treks, there's something everyone can enjoy 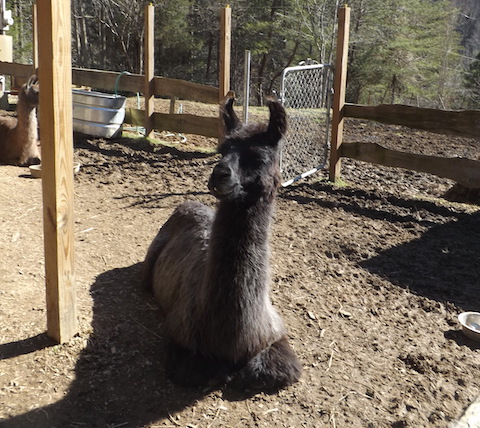 So, what's so inspiring about llamas? Llamas (and alpacas) are having a bit of moment right now. Just Google llamas, and you'll find everything from adorable stuffed animals to kitschy decor to pun-adorned make-up bags. I, personally, am unashamed of the stuffed pink alpaca I bought for five bucks at a supermarket on a whim after a particularly bad day. Something about its big eyes, stubby legs, and floppy ears instantly made me a little less upset and made me smile. Even my boyfriend thinks it's adorable. After an afternoon at Smoky Mountain Llama Treks, you'll see that real llamas are just a cute and fluffy as their plush counterparts and spark just as much joy.

Smoky Mountain Llama Treks offers a variety of hikes with their llamas. There are experiences for novices and seasoned adventurers alike, and you can even book an overnight trek for a completely unique adventure. Families should be advised that children under 5 are not allowed on the trails, and children under 12 must be accompanied by an adult. My boyfriend and I chose the Padgett Mill hike plus the farm visit, which allows you to both meet and hike with the llamas. This particular experience meets at the llama farm, but some of the other longer hikes meet a various trailheads around the Great Smoky Mountain National Park.

Getting to Smoky Mountain Llama Treks

The drive out to Smoky Mountain Llama Treks offers a quiet reprieve from the hustle and bustle of the Parkway or Downtown Gatlinburg. The farm is located about 35 minutes from Gatlinburg and 40 minutes from Pigeon Forge in Cosby, TN, making it perfect day trip. As you wind down highway 321 to or from the llama farm you can enjoy some local grub at family-owned restaurants as well as small shops selling crafts. Or just take this drive to enjoy the mountain air and the lush, green surroundings of the mountains.

After meandering down 321, you'll turn onto Padgett Mill Road and cross over Cosby Creek. Be advised that Padgett Mill Road is a narrow, gravel road. Needless to say, I was quite happy we decided to take the Honda C-RV and not the Toyota Yaris that day, so you might want to make sure your vehicle is up for the drive. Smoky Mountain Llama Treks is about two miles down this road and on your right. 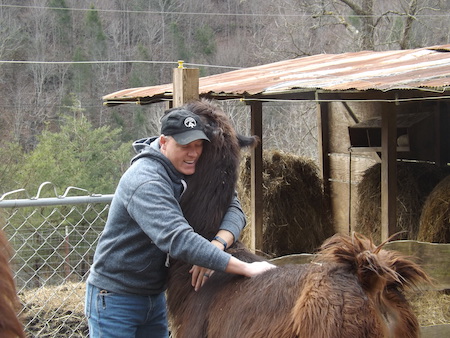 Once you drive up the hill, you'll have arrived at the llama farm and will quickly be greeted by the owner of Smoky Mountain Llama Treks himself, Steve Garett, and probably a dog or two. Steve will most certainly greet you with a smile that lights up his whole face and, perhaps, an unusual question for someone you just met - "What are your dreams?". This is just the beginning of what is sure to be an uplifting and inspirational excursion.

Steve starts the experience by sharing the story of how he got to the llama farm in the first place. Steve had a former life in the business world in Michigan prior to the 2008 recession. After being laid off from his IT job, Steve decided he needed a change of scenery and some time alone to formulate his next move - and what place to do so than on the Appalachian trail. While he hiked a large portion by himself, he also made a couple of friends along the way - a doctor from the Cincinnati area and an adventurer from New Zealand.

Over the 2 and half months of his 1500-mile journey, Steve stepped back and reevaluated the source of his happiness and values in his life. He felt his place was not back in the busy world of business but somewhere quieter, more peaceful where he could live a simple life. Somewhere like a…llama farm? Okay, so Steve will admit himself that llamas weren't his first pick and seemed a bit out in left field for him. However, as Steve would tell it, divine intervention kept pushing him towards llama farms and he couldn't resist that calling. He came down to Tennessee, bought the farm, and started on a new adventure in the heart of Appalachia.

The llamas themselves have an equally interesting backstory. Dubbed the "Navy Seals of llamas" by Steve, most of the herd are veteran llamas from Mt. LeConte. These llamas make the trek up and down Mt. LeConte with 40-60 pounds of supplies on their backs. Those llamas who have retired from service join Steve, where they take on a new job of being part of a unique adventure in the Smokies. Currently, Steve has 12 llamas and one alpaca in his herd. Each llama has his own personality, and Steve will gladly tell you about each one. 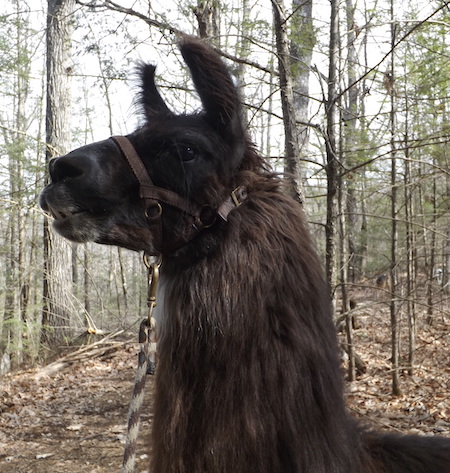 Once you've been properly introduced to the llamas, you'll be able to step inside the pen and pet and groom your llama before the hike. You can choose your own llama or have Steve pick one for you. I opted to have Steve choose for me, since, I reasoned, he knew their personalities on the trail a bit better than I did. I received Maximus, who really was the sweetest llama out of the bunch, at least in my opinion. My boyfriend was assigned White Lightning, one of the larger (and a little feistier) llamas. Before heading out on the trail, we each brushed our llama to get acquainted with them, which might have been my favorite part.

One quick note before I tell you a little more about my day at the farm. You may have heard that llamas spit. While this may be true of llamas you find at petting zoos who have grown a little too accustomed to humans, it is certainly not true of Steve's herd, who have been trained to respect guests. From my visit at the farm to the entirety of my hike, my llama did not spit on me once. So, please, don't let this myth keep you away from this attraction.

After pampering our llamas, we headed towards the Padgett Mill Trail, which goes across Steve's property and a neighboring property. Steve made the trail himself, adding a bit of his uplifting spirit along the trail. The trail is lined with handmade signs with inspirational quotes about following your dreams and stepping out of your comfort zone. This is a nice touch considering the first bit of a trail might be considered a little step for those who don't go on hikes often, though overall the trail is not a hard hike. It also adds an air of contemplation, going back to Steve's early question "What are your dreams?"

The hike itself goes at ambling pace, giving you time to enjoy petting your llama as you walk along the trail or letting them stop for pine needle snacks. I'll admit I was a little skeptical of what a llama would add to a hike in the Smoky Mountains, but Max proved a well-tempered companion who enjoy lots of attention (and snacks) that made the beautiful natural setting even more enjoyable.

On this trek, you'll hike for about an hour and enjoy views of the Smokies with your llama at your side. Along your hike, Steve will share stories of visitors to Smoky Mountain Llama Treks who have inspired him for their perseverance against difficult circumstances. This is Steve's ultimate goal for his attraction - that it inspire and uplift. 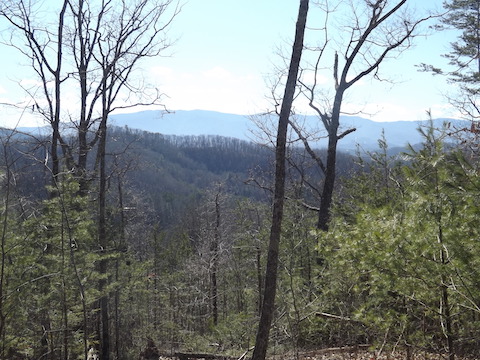 And I would say he's quite successful with this goal. As our hike ended, aside from wanting to hang out with my llama more, I felt the sense of peace I usually feel after a walk in the woods, but it was slightly different. I left with a smile on my face and a sense of affirmation that the work I'd been putting into my own dreams, though hard, was worthwhile. My boyfriend also felt inspired by the trip, and we revisited our own goal of having a homestead in the woods one day with some chickens, sheep, and a cow on the drive back home.

I think I'll need a llama or two on it now, too.